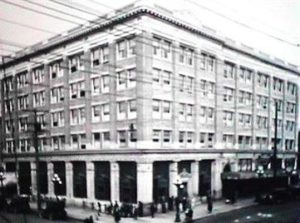 The Bellingham National Bank was formed in 1904 by a group of local capitalists led by Victor Roeder. It opened for business on January 3, 1905 in the corner store-room of the Clover Block on the corner of Holly and Commercial Streets.[2] The small bank soon grew to become one of the most prominent banks in Bellingham and began searching for larger quarters by the end of the decade.

In March 1912, the bank purchased the Southeast corner of Dock and Holly Streets for $175,000. The site was occupied by several wooden buildings dating to the late 19th century including the Beck Hotel, built on the corner in 1888 by David Beck who would later build the adjoining theater.

The Bellingham Bank Building now hosts dozens of local and national businesses in the heart of downtown Bellingham. and this websites purpose is to highlight the tenants and news surrounding the downtown area.